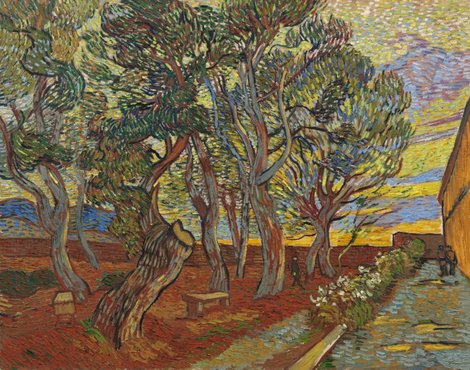 Garden of the asylum (1889) by Vincent Van Gogh

I began this concerto in 1996 or thereabouts. For a long time there was just the first movement, and it was originally scored for strings alone. After the slow movement there was another long gap till I got round to the finale in 2006, prompted by the fact that we were going to perform it with my amateur orchestra.

With the first movement, I wanted to achieve a return to the classical momentum that had largely been lost thoughout the Romantic era and onward. The energy is unflagging, verging on the desperate, relief being provided only by the two appearances of the expansive second theme; but even this is underpinned by a niggling rhythm in the violas, deriving from a typical piece of sarcastic nastiness into which the various elements making up the first subject have coalesced.

The second movement provides a welcome contrast. Its opening makes use of change-ringing techniques applied to slowly moving scales in violins and violas (the first time I had tried this), evoking distance bells ringing across a valley.The first subject material is developped by the soloist against this background, ultimately arriving at a second idea marked "Pavane". The development is mainly concerned with the first subject material, leading to a return of the pavane in the highest register of the violin against chiming oboes and violins (the scales have acquired a dotted rhythm during the development) - a very strange sound, this. When everything is suddenly cranked up a tone into a radiant D major, the music becomes almost tearfully joyous for a while, before gradually fading away, the distant bells reluctantly ceasing their ringing.

The short finale is a passacaglia incorporating a gradual accelerando from andante to presto. It culminates in a severely logical rendering of the passacaglia theme as a duet for the unusual combination of solo violin and timpani.