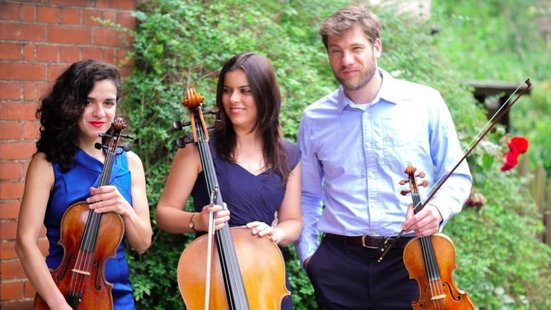 The String Trio No. 2 was written as a thank-you present for the Veles Ensemble who gave the first performance of the String Trio No. 1 and recorded it on Toccata Classics (TOCC0506). It is in three movements, the first in sonata form, while the second is a set of variations on no particular theme. The musicians play separately or in pairs, coming together as a trio only for the final variation. The last movement is a kind of moto perpetuo, with sixteen semi-quavers sounding in every single bar. It is played piano throughout, until the coda on entirely new material, where, after a ghostly version of the second subject on cello harmonics, a crescendo brings a sense of mounting excitement, leading to the defiant, almost desperate ending.

The String Trio No. 2 was first performed on September 14th 2019 as part of the Roman River Festival, Colchester. The version below is a computer mock-up of the trio.