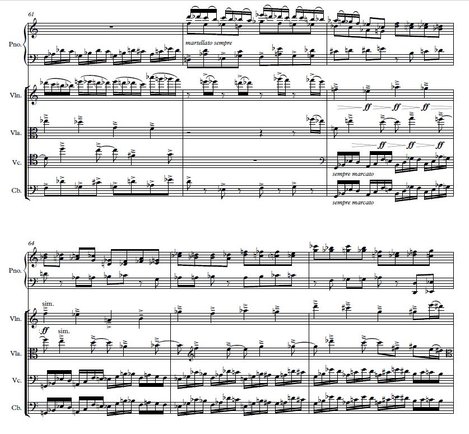 This piece was written in response to a commission by the Pleyel Ensemble.

The first movement is in sonata form. The opening theme throws out several subsidiary motives before moving to a faster tempo for a transition featuring semitonal clashes between the upper strings. During this passage, an angular theme emerges on violin and viola which, surprisingly, morphs into a slower second subject, marked to be played tenderly. The development section sees one of the subsidiary themes degenerate into a wild waltz, before calm is restored with the recapitulation.

The Adagio second movement is in ternary form. In the first part the strings strive to achieve a lyrical flowering, which they ultimately do after several attempts. In the central section time seems to stand still as overlapping higher strings, then double bass and finally the strings in octaves

attempt a long-breathed melody, without quite having decided how it is to end. After a return of the first part, the ghost of Mozart arrives and plays the theme - complete with ending - on a toy piano.

The final movement is a rondo of the form ABACAB. Fluid triplets on the piano lead to a broad theme first presented on the viola, then in canon between violin and cello. A transition then ushers in the rhythmically contrasted B section, which reaches a brief climax before the material from A returns, this time with the piano leading. Proceedings are halted for the third part of the movement: a brief adagio variation of the movement's main theme. This leads to a recapitulation of A and B, with B now taking over completely, seemingly hijacking the movement and driving it to a hectic conclusion.