Concertino for clarinet & strings (Op. 11a) 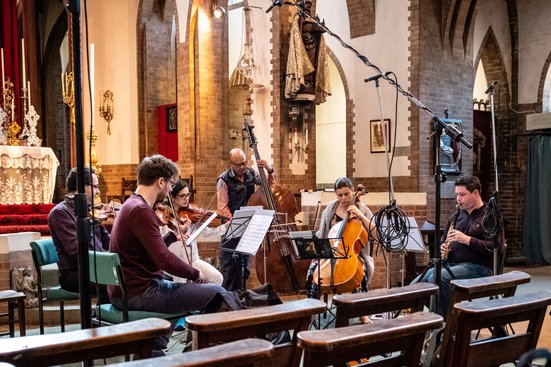 "Features of Elcock’s style that strike the listener more or less instantly (…) are the confidence and fluency of his writing, a seemingly infinite melodic and harmonic imagination, an unerring sense of purpose and direction..."

This piece began life in 2001 as a concertino for clarinet and strings and it was in this form that it received its first amateur performance in France, with the clarinettist Philippe Mercier for whom I had written it. The sextet version was made in 2014 and revised in 2017. It is in three movements, the first a conventional sonata-form allegro, the second a slow movement framing a scherzo-like central session, and the third a set of variations.

The first theme of the Allegro commodo (ex. 1) is given to the clarinet. The upward rushing scale and the dotted rhythm echoed in the bass will become important later in the piece. After a transition, the haunting second theme (ex. 2) is also  presented by the clarinet before being taken up by the strings. The exposition closes with a short codetta theme (ex. 3a) which sounds as thought it were in triple time, followed by a rhythmic motive (ex. 3b). These two elements form the substance of the development section, during the course of which a curtain is pulled aside to reveal a much darker world behind the scenes. After some delicate musings on the codetta theme, the recapitulation follows fairly regularly and leads to a vigorous coda.

The central Romanza begins over a droning bass which, oddly, was suggested to me by the central heating system in a church where we were about to give a concert. Over this, the clarinet's musings finally arrive at a deformed version of what is to becomes the unashamedly romantic melody which is given in full towards the end of the movement. Example 4a shows the distorted version of the theme, and example 4b, its final realisation. Between these, the speed doubles to make way for the scherzo passage, during which the clarinet gives another hint of what the romantic theme will be. The slow pace now returns and with it the theme, now played as shown in example 4b. Its extension, on totally new material, is sorrowful in mood and leads to an anguished cry from the clarinet, after which the movement fades out over a plodding bass.

This bass turns out to be the substance of the first variation which opens the last movement, Variations and theme. There are ten variations in all, during which the listener may detect whiffs of Brahms, Gershwin and Rossini, inter alia. After a brief pause the theme itself is revealed to be a traditional reel, known as The Mason's Apron. The first violin, who has the tune, is asked to assume a folk style of playing. The final bar of the theme is interrupted by the clarinet, who now brings back the very opening music of the work, and this and the reel are quietly worked out together, leading the music to a wistful fade-out.

The recording below is of the sextet version of the piece performed by the Veles Ensemble (Hartmut Richter, vln., Ralitsa Naydenova, vla., Evva Mizerska, vc.) with Yuri Kalnits, vln., Leon Bosch, cb., Peter Cligleris, cl. It was released in September 2018 on the Toccata Classics label.