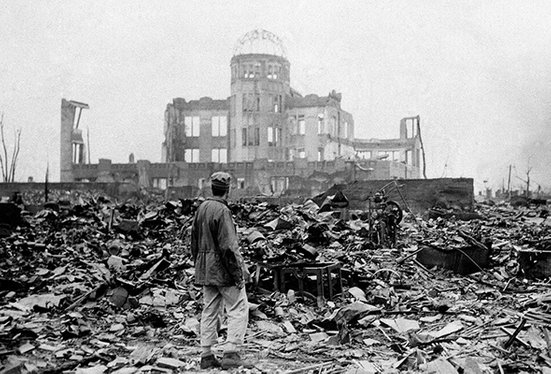 "Elcock's masterful orchestrations are wonderfully imaginative, not a note (or a timbre, or compositional device) is wasted; the music is fresh, bracing, exciting, cinematic, intriguingly designed (...); there is an immediacy to it which is enchanting and the listening experience leaves you wanting more."

This piece for orchestra is in three parts, played without a break, and entitled respectively "colonnes brisées (broken columns)", "moulin de dieu (mills of god)" and "dernier homme debout (last man standing)". The title refers to an explanation of the usage of the French defective verb "gésir" found in the conjugation manual "Le nouveau Bescherelle (Hatier 1996), p. 56, which states that this verb is hardly ever used nowadays except to speak of the ill or the dead, or of things knocked down by time or destruction. Choses renversées par le temps ou la destruction was recorded in May 2017 by the Royal Liverpool Philharmonic Orchestra conducted by Paul Mann and released on the Toccata Classics Label.

In the first part (1), a Bach prelude played on the harpsichord is constantly interrupted, and ultimately broken, by a threatening motif on the brass. As this dies away, we hear the mills of god (2) grinding at first slowly, then with gathering speed to reveal an impassioned line on the cellos. Tension is built up as the music seems to congeal in a passage for high cellos and oscillating cor anglais, underpinned by on a roll on the bass drum. The close of this section reveals the mill wheels spinning across the full orchestra in a great wall of sound, abruptly cut off.

The final part (3) is a slow rondo in 3/4 time, alternating passages of great violence with others (tuba, clarinet, cor anglais) seemingly evocative of sorrow, regret or resignation. A recapitulation starts to form, but is knocked out by the introduction of a piece of musical anti-matter in the shape of a rock ryththm. In the wake of this disaster, the harspichord from the first part returns, now reduced to playing an accompaniement to all that the last man standing has to offer: a vulgar waltz tune. Even this is interrupted by fallout that drifts down through the orchestra, forcing the music into the depths where it dies, fouled up by junk

Choses Renversées par le Temps ou la Destruction was recorded on May 5 and 6 2017 by the Royal Liverpool Philharmonic Orchestra conducted by Paul Mann and released as TOCC 0400 on the Toccata Classics label. It received its first public performance on December 20, 2017 by the BBC Philharmonic conducted by Moritz Gnann.